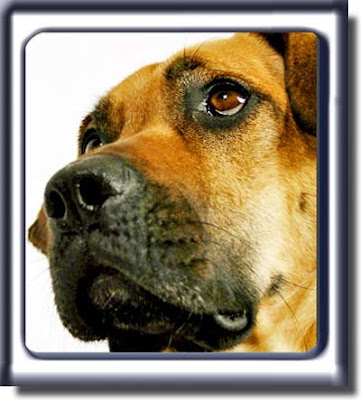 I like meal time, but sometimes it tastes funny.

Allex Michael: Ebbey is fed home made food, both for her health and because there are few foods she can eat due to allergies. Because of this, she needs a lot of supplements. Some of which are not too tasty. (Believe it or not, Ebbey's also allergic to many vitamins and minerals like calcium citrate and glucosamine derived from shellfish).

Extra broth can help hide the various powdered vitamins and minerals and her evening snack with fruit also covers the powdery tastes. But dinner, with ground up vegetables, is a tough meal as Ebbey neither likes veggies or vitamins.

There is no kitty, who can stand off longer than me! Something about a kitty who won't run. Some where back in my memories, I know enough to stay clear.

Allex Michael: Found starving in a garbage dump, Ebbey used to know there is no fiercer creature than a garbage dump cat. It is hidden some where in her memories. However, after 2 years of captivity and domestic living, Ebbey can't seem to remember exactly why.

A cat was recently sitting outside a neighbor's home, where two dogs also live. As Ebbey approached, the cat stood her ground and quickly began arching her back. Ebbey stalked the cat within 4 feet, but would go no closer. Unfortunately she would not leave the stand off either. So I had to drag her away. Of course the cocky kitty then stalked us for a while...which led to more Ebbey dragging. 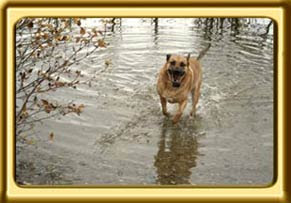 Been very busy chasing bunnies, kitties and mousies. Sorry it's been a while since I posted. Will try to catch up. With all the rain and now heat, I've been bringing home these round little bugs after almost every walk. Luckily they never bite, just drop off inside the house.

Allex Michael: Ticks don't seem to like dogs who eat garlic. Fed a whole clove each daily, neither Ebbey (85 pounds) or her Rottweiler roomate (90 pounds) have been bitten. Though both seem to be providing a tick taxi service into the house. The unfed parasites then crawl up the furniture and curtains awaiting an ususpecting meal. Luckily all humans in the house also eat garlic, so no bites or Lyme disease yet. 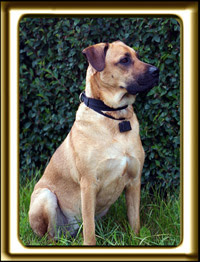 This was the largest mouse I've ever seen. After over 30 seconds of stalking, the creature refused to run. Only then did I discover, it was another fake animal.

Allex Michael: Though quite realistic, a newly placed raccoon lawn ornament was only about the size of a small rat. But in the dark, placed under a tree, it was easy to mistake for some kind of critter. 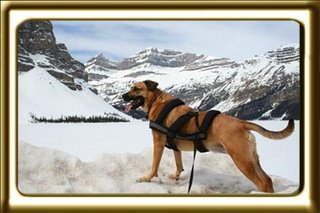 I froze in my tracks, as the creature approached.

Allex Michael: I don't wear fur and Ebbey has obviously never seen a fur wearing human based on her reaction.

We were invited to a rather posh New Year's brunch at an acreage and several of the guests were wearing fur. One rather short lady was wearing a floor length fur coat with the hood up and Ebbey suddenly froze, staring at her. Several moments passed as her back ridge and hackles raised and then calmed and then raised again. She was likely assessing whether this a two legged predator about to attack or just a rather furry human. As soon as the lady assured she was human Ebbey calmed right down and went over for a pet. However, she still kept a close eye on this furry woman. 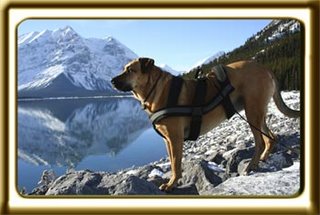 I was certain it was just a statue, but after my rottweiler companions reaction, I had to go over for a closer look.

Allex Michael: People put some unusual things on their lawns as Christmas ornaments, but this was a first. A small plastic deer statue, for hunting, was one person's idea of a Christmas decoration. Ebbey took one look and one sniff and kept walking, but her rottweiler walking partner was certain this was a real deer just a few feet away. After a large rottweiler pounce, followed closely by Ebbey, both dogs were now certain that this was another fake out animal. 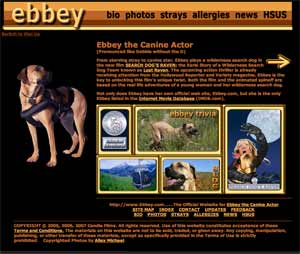 Getting thousands of hits per day, the new version of Ebbey.com is now on the web. It's design is still simple, but it looks sooo much better than the last version. Plus the page sizes are smaller and load faster.

Please take a look and tell us what
you think.